Seal-It International Inc. was recently asked a question that we could not answer. No one at Seal-It could remember a customer, or distributor, asking this question before. When a Colorado distributor of Seal-It products was asked to help reduce maintenance costs for a wooden treaded, pedestrian suspension bridge; the question of added weight had to be answered. Seal-It contracted the services of Enviro-Test Laboratories, a division of CHEMSPEC ANALYTICAL LIMITED, to determine the weight added when Seal-It Wood Sealant is applied.

Seal-It Wood Sealant was applied to these pieces of wood following Seal-its instructions. The samples were allowed to cure and dry for two days, after which they were weighed again by Enviro-Test Laboratories.

Seal-It, its customers and distributors feel this is a small “burden to bare” to get the added “rot” and wear resistance that Seal-It Wood Sealant will add to your wood structures and projects.

This document is also available in PDF format

But, unlike Seal-It Concrete Sealant, our Wood Sealant had fewer reported laboratory tests that confirmed its capabilities.

We also knew, and believed, that the best place to invest profits was back into the business that generated the profit. In the past this belief led to investment in advertising, both print and internet. With less than profitable results, actually less than breakeven results, we were disillusioned about advertising.

Although, still believing in the principle of re-investment in your own business, we decided to enhance the value of one of our hottest selling products, Seal-It Wood Sealant. Could it be proven scientifically that our wood sealant prevented rot?

Now to find a business that could prove Seal-It Wood Sealant would prevent wood rot, scientifically! This seemed to prove more difficult than we thought it should have, searching the internet provided sparse results. But the search did provide results. Lakehead University, Thunder Bay, Ontario, Canada could do what we were looking for. This made sense, Thunder Bay, Ontario, in the heart of lumber country! 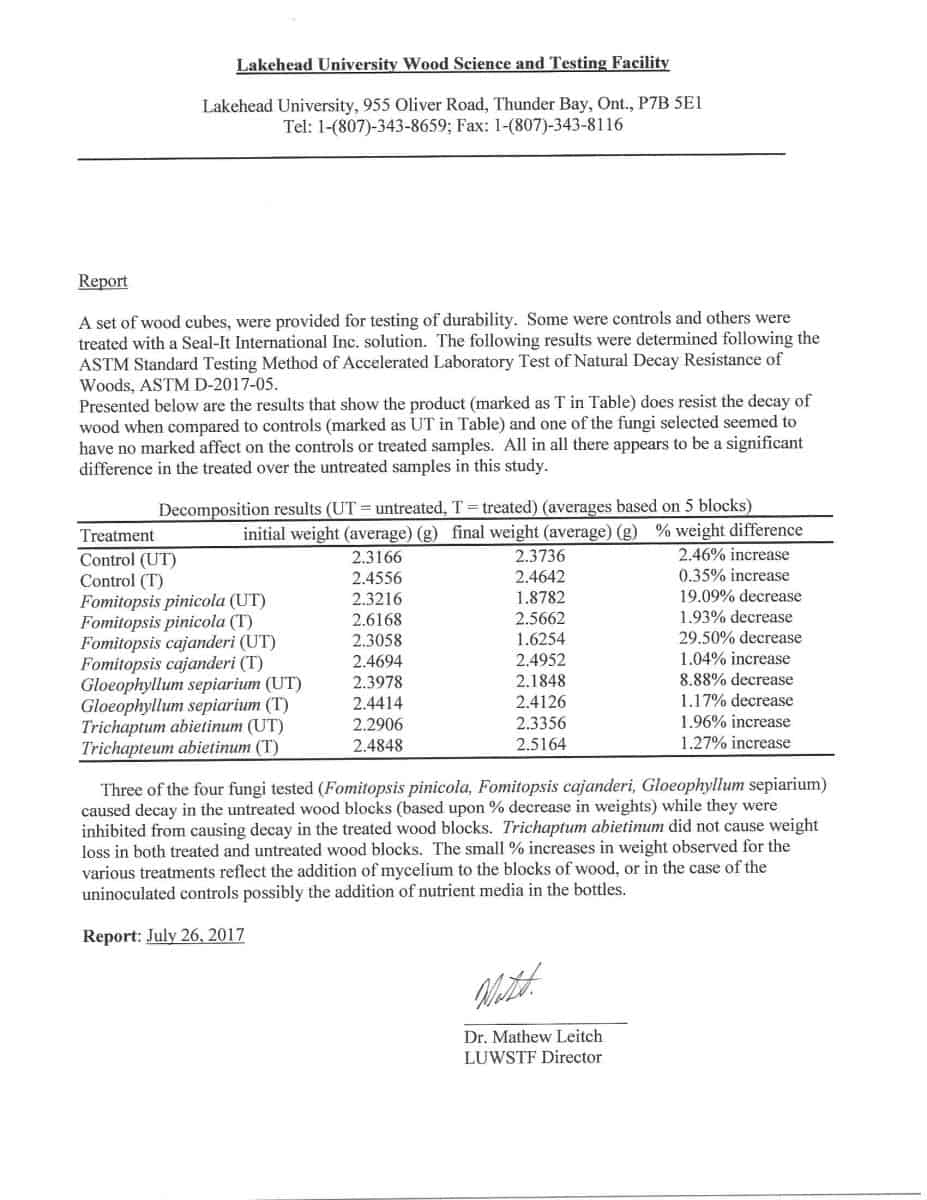 We talked to Dr. Mathew Leitch, Professor of wood science. He and his associate presented Seal-It with a plan to prove Seal-It Wood Sealant’s ability to prevent wood rot.

This, below, is the text from email received from Dr. Leitch:

“I have talked it over with the other Prof who will work on this and we have come up with a plan. The process of testing this according to standards is to place the blocks as I mentioned into a media that has white and brown rot fungi (separate for each type of fungi). The standards recommend testing of several boards. So we see testing 10 to 20 cubes in each fungi type and a similar number for controls in order to compare the mass loss.”

From here on, we are told the blocks of wood will be placed in controlled environment containers. One of four types of fungus placed in these containers with the wood.

According to the internet, these fungi are responsible for wood rot.

The lab received the wood cubes mid December 2016, and Seal-It received test results in Late July 2017 with this quote from Dr. Leitch: “Please find the results for the durability tests we did for you.”, “It appears the solution you have is pretty effective.”

We were quite pleased with that quote coming from a person that signs his name:

At the end of about 7 months, with wood cubes and fungus in containers that had been temperature and humidity controlled for optimum growth conditions of the fungus, the containers were opened.

Each cube would be weighed with the expectation that rot would have removed material from the wood. Less weight means more rot activity. The results of testing are in the table below.

So why did these cubes gain weight? Dr. Leitch addresses this and explains the increase in weight probably due to the addition of nutrients for the fungus, and the fungus itself.

So, to quote Professor Leitch’s: “All in all there appears to be a significant difference in the treated over the untreated samples in this study.”